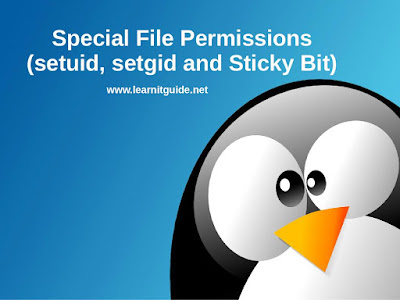 This post will help you to understand about Special File Permissions (SetUID, SetGID and Sticky Bit) on Linux.

We have already explained you about the default file permissions in linux (https://www.learnitguide.net/2015/11/linux-files-and-file-permission.html).

These permissions are needed to improve security. When these permissions are set, any user who runs that executable file assumes the user ID of the owner (or group) of the executable file.In other words, if an execute program is owned by root and the setuid perm is set, then no matter who executes that program, it runs as if being executed by ‘root’

With the help of “chmod” command  we can implement the special permissions on file and directories.

What is SetUID?
SUID / Set User ID/SETUID : Whenever SETUID permission has set on executable files, anyone executing that command (file) will inherit the permissions of the owner of the file.

The SetUID permission displays as an “s” in the owners executable field. For below example, the SETUID permission on the “passwd” and “su” command which provides the access to change the passwd for users.

Note: This special permission can be quite dangerous. For example, If you have a SETUID shell which is owned by one user, other user essentially inherit your file permissions by executing it, hence they have the ability to remove all files which owned by the real user.

How to set SETUID on Linux?
Syntax is

In the first command, “4” represents the Value to set SETUID special permission, and other 555 permissions are for owner,group and others respectively. Second command, directly set SETUID to the groups in symbolic way.
[ads-post]
What is SetGID?
SGID / Set Group ID : SETGID permission is similar to the SETUID, except that the process’s effective group ID (GID) is changed to the group owner of the file, and a user is granted access based on permissions assigned to that group.

How to set SETGID on Linux?
Syntax is

In the first command, “2” represents the Value to set SETGID special permission, and other 555 permissions are for owner,group and others respectively. Second command, directly set SETUID to the groups in symbolic way.

What is Sticky Bit?
Sticky Bit :  If the directory permission have the sticky bit permission set, then the file can be deleted only by the owner of the file/directory or the root user.This special permission prevents to delete other user’s file from public directories.

How to set Sticky Bit on Linux?
Syntax is

Hope you have got an idea what is Special File Permissions on Linux with Examples.

Related Linux contents that might be useful for you to improve your Linux Skills.