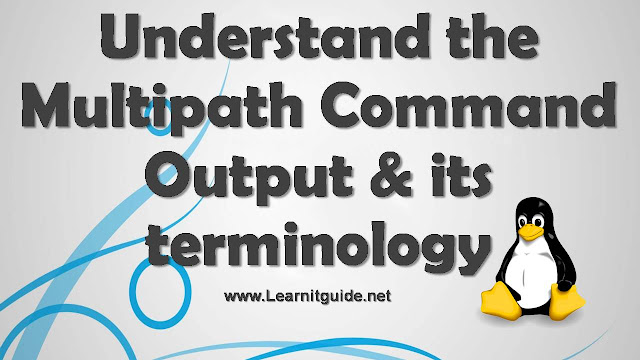 This post will help you to Understand Multipath Command Output & its Terminology.

This article explains to Understand the Multipath Command Output & its terminology. In the previous article, we have explained how to Configure Multipathing in Linux (RHEL7/CentOS7).

Lets understand multipath command output to check further for troubleshooting any issue related with multipathing and also understand its terminologies.

Path
Connection from the server through a HBA to a specific LUN. Without DM-MP, each path would appear as a separate device.

Path Group
Paths are grouped into a path groups. At any point of time only path group will be active. Path selector decides which path in the path group gets to send the next I/O. I/O will be sent only to the active path.

Path Priority
Each path has a specific priority. A priority callout program provides the priority for a given path. The user space commands use this priority value to choose an active path. In the group_by_prio path grouping policy, path priority is used to group the paths together and change their relative weight with the round robin path selector.

Path Group Priority
Sum of priorities of all non-faulty paths in a path group. By default, the multipathd daemon tries to keep the path group with the highest priority active.

Path Grouping Policy
Determines how the path group(s) are formed using the available paths. There are five different policies:

Setting multibus as path grouping policy for a storage device in Active/Passive mode will reduce the I/O performance.

Path Selector
A kernel multipath component that determines which path will be chosen for the next I/O. Path selector can have an appropriate load balancing algorithm. Currently one one path selector exists, which is the round-robin.

Path Checker
Functionality in the user space that is used to check the availability of a path. This is implemented as a library function that is used by both multipath command and the multipathd daemon. Currently, there are 3 path checkers:

UID Callout (or) WWID Callout
A standalone program that returns a globally unique identifier for a path. multipath/multipathd invokes this callout and uses the ID returned to coalesce multiple paths to a single multipath device.

Priority Callout
A standalone program that returns the priority for a path. multipath/multipathd invokes this callout and uses the priority value of the paths to determine the active path group.

Hardware Handler
Kernel personality module for storage devices that needs special handling. This module is responsible for enabling a path (at the device level) during initialization, failover and failback. It is also responsible for handling device specific sense error codes.

Failback
A failed path can become active at any point of time. multipathd keeps checking the path. Once it finds a path is active, it will change the state of the path to ready. If this action makes one of the enabled path group’s priority to be higher than the current active path group, multipathd may choose to failback to the highest priority path group.

Alias
A user friendly and/or user defined name for a DM device. By default, WWID is used for the DM device. This is the name that is listed in /dev/disk/by-name directory. When the user_friendly_names configuration option is set, the alias of a DM device will have the form of mpath<n>. User also has the option of setting a unique alias for each multipath device.

Hope this post is useful to Understand Multipath Command Output & its Terminology.