What is Ansible Playbooks? 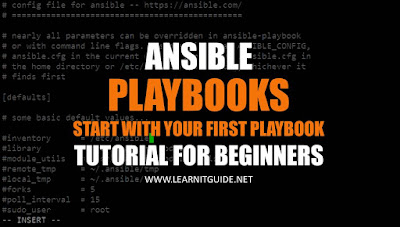 Ansible playbooks are a way to send commands to remote computers in a scripted way. Instead of using Ansible commands individually to remotely configure computers from the command line, you can configure entire complex environments by passing a script to one or more systems.

Each playbook contains one or more plays, which map hosts to a certain function. Ansible does this through something called tasks, which are basically module calls.


How to Create Ansible Playbooks?

Create Ansible Playbook with a file name, not necessary to have the filename with any extension. but create with extension with “.yml” else you wont find the difference of normal text file and a playbook.

The file starts with: —

This is a requirement for YAML to interpret the file as a proper document. YAML allows multiple “documents” to exist in one file, each separated by “—“, but Ansible only wants one per file, so this should only be present at the top of the file.

We should be more cautious with the spaces while writing a ansible playbook. Tabs are not allowed here. Character should start exactly or after the previous parameter starts and it should looks like a statement as shown in the above examples.

Hosts declaration (- hosts: all) – It defines that on which server groups playbook should run based on the ansible inventory file.
Variable declaration (vars) is optional, we see some examples how to declare a variable below.

You can also use other parameters like, name, actions, notify, remote users depend on the requirement.

As shown in the above example, we should define the tasks to be performed.

Under the tasks (tasks:) – You specify the list of tasks to be carried out. Every task should have a name, which will show you in the output while running the playbook and also its easy for us to identify it.

So lets create the task.

We can create a multiple task for each actions as shown in the above example.

Name : describe the task what it is actually going to perform.
Then action what are you going to do. Each task is to execute a module, with very specific arguments. here we have used different modules. yum used to install the package, copy used to transfer the file from source to target server and service used to start and enable the httpd service.

Verify the playbook for syntax errors:

Lets do syntax check to ensure there is no syntax error using below command.

To see what hosts would be affected by a playbook before you run it, you can do this:

Above output shows that only host “server1” will be affected with this playbook.

Run a playbook and configure the httpd service.

Above output shows the summary of the playbooks.

Play – Display that this playbook runs on all hosts as per the hosts declaration.
Task – Ansible gathering facts(catalog) from all servers to run the actions.
Task – Name of each action as per the playbook
Under the task – Changes of the state.

Finally, you got the status of the complete playbook as, 4 tasks are OK without any errors and 2 changes are done which are installing httpd package and starting / enabling httpd service. Unreachable and failed are zero.

Variable Declarations:
Instead of creating 10 tasks for installing 10 different packages, you can create a single task by using variables in a same playbook as below,

Above example use a variable definition (vars:) to install a multiple packages vim and yum-utils. Similarly, you can modify only the package names.

Loops are typically used to repeat a task using different input values as we have used variable declaration.

To create a loop within a task, include the option with_items with an array of values. The content can be accessed through the loop variable item, as shown in the example below:

You can also use an array variable to define your items:

Notify and Handlers in Ansible Playbook

The “notify” item contains a list with one item, which is called “restart apache”. This is not an internal Ansible command, it is a reference to a handler, which can perform certain functions when it is called from within a task. We will define the “restart apache” handler below the palybook.

The “handlers” section exists at the same level as the “hosts” and “tasks”. Handlers are just like tasks, but they only run when they have been told by a task that changes have occurred on the client system.

For instance, we have a handler here that restarts the apache service after the package is installed. The handler is not called unless the “copy httpd configuration file” task results in changes to the system, meaning that httpd file from source should be copied to the target server and wasn’t already there.

Getting help for Modules and its arguments:
To list all modules available in ansible,

If you are not sure about the value of modules like state, Documentation for each module can be accessed from the command line with the ansible-doc tool:

If you find any options started with “=” its a mandatory and should be included in the actions.

[[email protected] ~]# ansible-doc yum | grep -i “=”
OPTIONS (= is mandatory):
installed higher version of that package. Note that setting allow_downgrade=True
Package name(s) to exclude when state=present, or latest
= name
state=latest, this can be ‘*’ which means run `yum -y update’.  You can also pass
a url or a local path to a rpm file (using state=present). To operate on several
If set to `yes’, and `state=latest’ then only installs updates that have been

So hope you have got an idea on Ansible Playbook. Going forward we will play more with ansible tool. Keep practizing and have fun. thank you.