How to Install Kubernetes Cluster with Docker on Linux
Create Kubernetes Deployment, Services & Pods Using Kubectl
Create Kubernetes YAML for Deployment, Service & Pods
What is Docker – Get Started from Basics – Docker Tutorial
What is Container, What is Docker on Container – Get Started
How to Install Docker on CentOS 7 / RHEL 7
Docker Images Explained with Examples – Docker Tutorial
How to Run Docker Containers – Explained with Examples

Kubernetes is an orchestration engine and open-source platform for managing containerized application workloads and services, that facilitates both declarative configuration and automation. Kubernetes is also commonly referred as K8s.

Kubernetes can speed up the development process by making easy, automated deployments, updates (rolling-update) and by managing our apps and services with almost zero downtime. It also provides self-healing. Kubernetes can detect and restart services when a process crashes inside the container. Kubernetes is originally developed by Google, it is open-sourced since its launch and managed by a large community of contributors. It makes better use of hardware to maximize resources needed to run your enterprise apps. It can be used to Scale containerized applications and their resources on the fly. Any developer can package up applications and deploy them on Kubernetes with basic Docker knowledge. 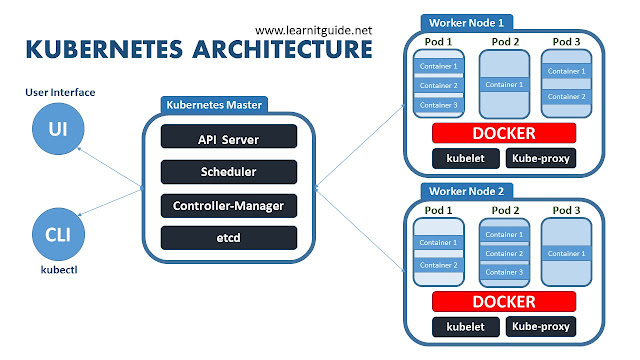 Kubectl is a command line configuration tool (CLI) for Kubernetes used to interact with master node of kubernetes. Kubectl has a config file called kubeconfig, this file has the information about server and authentication information to access the API Server.

Kubernetes Master is a main node responsible for managing the entire kubernetes clusters. It handles the orchestration of the worker nodes. It has three main components that take care of communication, scheduling and controllers.

Some of the controllers are,

etcd is a simple distribute key value store. kubernetes uses etcd as its database to store all cluster datas. some of the data stored in etcd is job scheduling information, pods, state information and etc.

Worker nodes are the nodes where the application actually running in kubernetes cluster, it is also know as minion. These each worker nodes are controlled by the master node using kubelet process.
Container Platform must be running on each worker nodes and  it works together with kubelet to run the containers, This is why we use Docker engine and takes care of managing images and containers. We can also use other container platforms like CoreOS, Rocket.

Kubelet is the primary node agent runs on each nodes and reads the container manifests which ensures that containers are running and healthy.

Kube-proxy is a process helps us to have network proxy and loadbalancer for the services in a single worker node. It performs network routing for tcp and udp packets, and performs connection folding. Worker nodes can be exposed to internet via kubeproxy.

A service is responsible for making our Pods discoverable inside the network or exposing them to the internet. A Service identifies Pods by its LabelSelector.

The deployment is visible inside the cluster
The deployment is bound to a port of the Master Node
Each Node will proxy that port to your Service
The service is available at http(s)://:/
Traffic is load balanced between the Pods of the deployment

The deployment gets a Public IP address assigned
The service is available at http(s)://:<80||42>/
Traffic is load balanced between the Pods of the deployment

Hope you have got an idea about what is kubernetes and introduction of kubernetes. In the next post, we have shown you How to Install & Configure Kubernetes Cluster with Docker on Linux. Going forward we will play more with kubernetes cluster.